Migwan was founded in September of 2004 by a small number of individuals and young families of varied backgrounds.Their common purpose was to create a home for liberal Judaism in the Basel area. From the outset, many “expats” have participated in our congregation, and all our events and services are held in Hebrew, German and English. A number of our English-speaking members have become long-term residents of Basel or of other communities in the area. At present, Migwan has 100 adult members and about 45 children/young people, with membership of both groups steadily rising.

We are very happy to be able to use this Torah scroll to commemorate a lost Jewish tradition that is brought back to life. On August 27, 2017, our role, originating from Brno, was solemnly inaugurated. 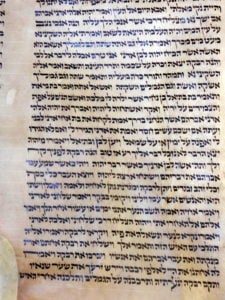 During the Second World War, many Torah scrolls were destroyed, but a considerable number survived, often damaged. The Memorial Scolls Trust was founded in London with the aim of collecting and repairing preserved specimens from the Czech Republic and lending them to Jewish communities for a small fee. So these Torah scrolls continue to live in numerous Jewish communities throughout the world, are used again and tell their story. The Trust has about 1,600 Torah scrolls, of which more than a thousand have been borrowed so far.

In the middle of the thirteenth century, the presence of Jews in Brno was documented for the first time. Since 1333, the municipality was autonomous with its own community institutions such as schools and synagogues, financed by a council tax. During the Hussite Wars in the 15th century, the Jews were increasingly persecuted and 1454 finally expelled from the city. Most then lived in the surrounding places. Although they were allowed to trade in the city, but did not live there and do not form their own communities. Only in the revolutionary year 1848 were the Jews on an equal footing, could live where they wanted, and all professions were open to them. At the end of the 19th century, 7000 Jews lived in Brno, in 1941 there were 11000. Most of the Jews were first deported to Terezin (Theresienstadt) and then to Auschwitz, where most were murdered. Only about 700 Jews survived. Today there is a small Jewish community of 300 members in Brno, and one of the less damaged synagogues has been restored.