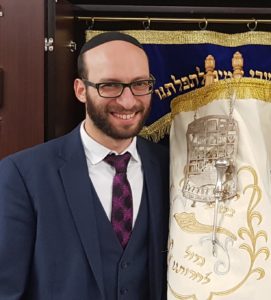 I have always wondered about the issue of global warming. I grew up in a society that believes that the world is run by God and that we as human beings, small and insignificant beings, have no influence on how the world is run. Although in the Rabbinic sources we have a Midrash (Kohelet Rabba) that says that God says to Adam immediately after the creating the world something else, “In the time that God created Adam, he took him and showed him all the trees in the Garden of Eden and said to him: See my work how great it is! and everything that I created, I created for you. Pay attention, that you do not ruin and destroy my world. Because if you ruin it, there will be no one to fix it after you.” Which basically says, that the Creator of the world believes in the ability of us humans to destroy the world in a very physical way.

But we grew up in a society that despises science in general, we obviously enjoyed its developments like advanced medicine and all the progress that comes with it but cannot accept the continued discovery of science regarding the creation of the world, because in our text it is written differently. Although we do not have that kind of scientific evidence require to prove of our story, we have a very and strong belief in our way, because that is what our parents told us when we were little children and we stayed with it. So if the scientists are the “preachers” of this “gospel”, then we are automatically against it.

And this is something that has bothered me a lot and still bothers me to this day. It’s true that there are good questions about the extent to which science is in its infancy, to predict information over such a long period of time, and to be certain we are causing it and it does not belong to something bigger that the world has overcome in the past and some parts of its “life cycle”, nor have we tried it yet to know that it works, so why should we bother at all? In addition to that, there are some scientists that disagree with this.

We believe in something else and if you can’t accept our faith, then you do not know at all what is important in the world.
I find it really a shame that this important debate is going on at a political level. Why does this important conversation not take place on a serious and factual level on both sides, with people from different beliefs willing to take the matter seriously and really respond to both sides. We are talking about something with serious weight, the worrying side says that if we do not get our act together, then there will be no world here tomorrow, not only not for our child and grandchildren, but also for ourselves it will be unbearable to live here soon.

It brings me back to the famous part in the Talmud that says: “If all of Israel had kept one Sabbath correctly, the Messiah would have come immediately” (Bavli Ta’anit), so I would say to myself, let us put it to the test, let’s unite all the Jews of the world and keep one Sabbath correctly, we can know for sure if that’s true or not, here we have a “scientific” factor that we can actually put to the test. Did the writers of these lines in the Talmud know that there will always be so much controversy among Jews that there will be never a situation in the world that everyone will unite to decide what is “correct” and agree that the Sabbath was really kept.

If we only think about the Talmudic period, the Karaite Judaism was strong at the time and they, for example, are not allowed to have any fire on, on Shabbat, and Baal HaMaor writes “and anyone who does not eat something warm on Shabbat, should be checked if he’s not an heretic,” so how would these two groups kept one Shabbat together?

But in the matter of global warming, we really have a way to test it, and it does not require much of us, just to be a little more aware of it. The orthodox world likes to use the “pascal’s wager” as an argument why we all have to be religious in their way, so why isn’t pascal’s wager valid here? What can we lose if we try? Maybe we’re really destroying the planet with our own hands, we believe that “the world was created for me” (Mishna Sanhedrin), so maybe we should start listening to other people, we don’t have to agree with them but it is very worthwhile to at least listen, if what they say is true then we will all really be screwed. Nature does not pick on people based on their beliefs. Meanwhile in all the other things, scientists seem to know quite a lot what they are talking about, we now use computers that our ancestors would consider science fiction, most diseases today have cures, we fly in the sky like a bird and dive into the water like a fish, no other animal on earth achieved such abilities, and Adam did not bring us iPhones, it actually came from the school of those who wear white robes and have a PhD, and now they are telling us something that may not be most convenient for us, it requires some effort from our side.

In retrospect we always blame those who did not intervene, who sat on the sidelines when something bad was happening, is that what we are actually doing now? It is true that we no longer have wars in Western countries, genocide is not something that is close enough to us, but maybe this is the call for our generation in the West and in the future, our descendants will ask us, how could you ignore it? After all, you knew very well what was going on around you, the proof of this remained in their future science fiction computers.
Who are we protecting? the oil companies? what have they ever given us?

I do not have a strong conclusion to all this, I am not a scientist and I do not understand much of it, but as with anything else I do not understand enough of, I turn to the opinion of those who do know, those who have spent their finest years in researching the subject, they probably know more than me, and what am I as an individual really being required to do about it? Use less plastic? separate my garbage? Be more aware of the matter and change a little bit from my lifestyle? We’ve done tougher things than that, we’ll get over it too. I do want that in the future, when my grandchildren ask me, I can say full heartily, that I did my best to preserve the planet and did not ruin and destroy the world. And even if we do in the end discover that we didn’t need all this, then we can take comfort in the fact that we have tried to do something good and helpful for the world.