Our services will again take place on site. 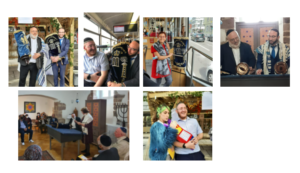 Inauguration of the new liberal synagogue “Gescher” Freiburg, Germany
After 22 years of wandering and searching for a permanent home for Torah and Kehila, the first post-World War II liberal synagogue in Freiburg was inaugurated on Simchat Torah, Sept 28th. The day could not have been better chosen as it was a joyful occasion. Just as it should be on Simchat Torah.
When the old-timer tram rolled up at 1 o’clock, members, politicians, representatives of various churches, two policemen as “guests” and the press gathered in large numbers. Welcome messages were delivered and at the first stop a Roma formation was playing fiery Klezmer melodies, complemented by Anita’s Yiddish songs and her wonderful accordion playing. We continued onto the site of the former synagogue, which was destroyed by the Nazis . The Torah scrolls were carried under the two chuppot into the sukkah, where Rabbi Dr. Rothschild read the last passages from the Book of Devarim. The tram then took all the guests to the new synagogue.
The Torah scroll was opened and with the creation of the world, Rabbi Akiva Weingarten started the new cycle of the year. With delicious appetizers, sparkling wine and good conversation, this wonderful day ended. Mazal tov!
Orah Mendelberg